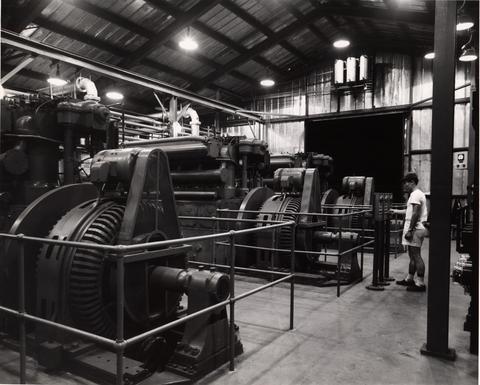 Some 280,000 people live on Cheju-do, a rocky, volcanic island lying off the south coast of the Korean peninsula. Four power plants built on the island by the UNKRA were put in operation recently, revealing Cheju-do as a symbol of UN aid in the Pacific. Built at a cost of $550,000 and installed under the supervision of UNKRA consultant engineers, they are situated in Cheju City, Hallim, Mosul-po and Sogwi-po. For the first time these townships and surroundings areas have continuous light for five to six hours in the evening. Here is an interior view of the Cheju City plant, which is the largest of the four; it is equipped with three 250 kw diesel electric generators with the accompanying switch gear. The plants are operated by the South Korea Electric Company. July 1956. [Photograph 4076]