"S-1945 contains records detailing the daily activities of Deputy Secretary-General Jan Eliasson, who held his position from 1 July 2012 to 31 December 2016. The records primarily consist of chronological files and contain correspondence; invitations; congratulatory letters; talking points and background information; and speeches. The bulk of records in S-1945 date from 2012 to 2015 and document the daily work and activities of Mr. Eliasson and his support staff in the Office of the Deputy Secretary-General. The ODSG is responsible for drafting, contributing to and clearing press releases, speeches, Q & A's, reports, talking points, background papers, and correspondence of the Secretary-General and Deputy Secretary-General for public events, meetings, and official travel. The records contain a variety of correspondence exchanged between the Deputy Secretary-General and representatives of Member States, non-governmental organizations (NGOs), and individuals. There are also drafts of reports cleared by the ODSG before they are submitted to the Secretary-General; and drafts and final versions of speeches given by Mr. Eliasson at events. In addition, there is a small amount of his personal correspondence written in Swedish. The subjects covered in the chronological files address: the refugee crisis and the investigation into the use of chemical weapons in the Syrian conflict; the cholera epidemic in Haiti; peacekeeping operations in Mali, Myanmar, and Somalia; the Israeli-Palestinian peace process; climate change; the Human Rights up Front (HRuF) Initiative; and the Millennium Development Goals (MDG) and post-2015 development agenda. The records also document the Rule of Law Coordination and Resource Group (RoLCRG), chaired by Mr. Eliasson and supported by the Rule of Law Unit of the ODSG. These records contain reports; correspondence and memoranda; as well as speeches on the principle of the rule of law as defined in the United Nations Charter. S-1945 also contains notes from Mr. Eliasson's meetings and telephone calls with Heads of State, representatives of Member States, and United Nations staff, including the Secretary-General and the Chef de Cabinet. Among the topics documented in these meetings are: the Hammarskjold Commission's investigation into the death of former Secretary-General Dag Hammarskjold; the crisis in Syria; rule of law; the post-2015 development agenda; and the Peacebuilding Commission (PBC). There are also update notes for the Secretary-General as well as statements issued to the press by the spokesperson of the Secretary-General following approval of the Deputy Secretary-General. Processing Archivists: Virginia Pastor, Aleksandr Gelfand, Emily Pagano, Tara Strongosky Volume: 45 boxes"

"The records in S-1954 document the daily activities of the Chef de Cabinet Susana Malcorra and consist of chronological files dating from 2012 to 2013. The records detail the Chef de Cabinet�s responsibilities in serving and assisting the Secretary-General and in establishing general policy; reviewing proposals, statements and policies brought forth for attention and approval of the Secretary-General; and maintaining links with various entities within the United Nations System. The records also document the exchange of information between members of the Executive Office of the Secretary-General (EOSG) including: Deputy Secretary-General; Chef de Cabinet; Deputy Chef de Cabinet; and the Director of Communications and Head of Speechwriting Unit. The records address a variety of subjects including: climate change; the crises in Syria and Mali; conflict in Southern Sudan; sectarian violence in Myanmar; the aftereffects of the Arab Spring; the problem of refugees; Millennium Development Goals (MDGs) and nuclear policy in Iran. The chronological files contain requests for the Secretary-General to meet with representatives of Member States, as well as invitations to give interviews, participate in photo opportunities, or attend conferences, seminars, exhibits, lunches, dinners, anniversary celebrations and movies sponsored or given by Member States, non-governmental organizations (NGOs), educational institutions and other groups. Among the records are background notes on events with reasons for attending; requests for assistance from Member States during the Secretary-General�s visits; delegation lists of those traveling with the Secretary-General and memoranda dealing with trip logistics; itemized logs of incoming correspondence; daily appointment sheets; proposed scenarios for events to be attended by the Secretary-General; provisional agendas for events and retreats; background information for meetings and phone calls including talking points, as well as transcripts and summaries of high-level meetings and phone conversations. The records also contain drafts of statements attributable to the Spokesperson for the Secretary-General or the Secretary-General; press statements; weekly press reviews; update notes on the daily situation in Syria, world hotspots, and internal management issues. Chronological files also contain letters of condolences for terrorist acts, natural disasters, accidents and deaths of United Nations peacekeepers; letters of gratitude to resigning diplomats, retiring staff members and individuals who provided assistance to the Secretary-General or his delegations; draft project proposals; draft invitations to Member States; and updates from Special Envoys. There are draft reports of the Secretary-General (typically consisting of the front page only) to the General Assembly and the Security Council approved by the Chef de Cabinet; correspondence and documents forwarded to the Security Council; and congratulatory letters to world leaders and diplomats from the Secretary-General on their election or appointment. In addition, the records contain notes and meetings of the Policy Committee and the Senior Management Group; reports of the Staff-Management Committee; memoranda and correspondence dealing with nomination, selection, appointment or renewal of special advisers and other United Nation employees; staff requests for approval of participation in activities outside of the United Nations, including the acceptance of awards or honours; staff travel authorization requests; financial disclosure requests; official notes dealing with office procedure and policy; and Senior Managers� Compacts. Processing Archivists: Alex Gelfand, Virginia Pastor Volume: 38 boxes"

"The records in S-1956 document interactions between the Executive Office of the Secretary-General (EOSG) and Member States; politicians; non-governmental organizations (NGOs); intergovernmental organizations (IGOs); civil, religious, private, and academic institutions; and the general public. The records mostly date from 2007 to 2010 and detail issues, primarily through correspondence, such as the United Nations' response to human rights abuses, humanitarian needs, and natural disasters; involvement in military activities and conflict resolution; political negotiations and matters related to elections; and United Nations' initiatives such as Millennium Development Goals (MDGS). They frequently document major events and efforts such as the attempts to combat piracy off the coast of Somalia; assistance provided in the aftermath of Cyclone Nargis in Myanmar and the earthquake in Haiti; armed conflict between Russia and Georgia; independence of Kosovo; the crisis in Darfur; and Millennium Development Goals (MDGs). In 2011, the EOSG adopted a new records classification scheme that contains records for the remainder of the Secretary-General's term. Records similar to those in S-1956 are also found within S-1959: Executive Office of the Secretary-General (EOSG) - Central Files (2011-2016). The records also contain: petitions; press releases; speeches and remarks made by the Secretary-General; reports; reference material; official United Nations documents; official notes; talking points; and internal correspondence and memoranda from the Secretary-General, Chef de Cabinet, and officers from the Department of Political Affairs (DPA). Incoming and outgoing correspondence include invitations to and from the Secretary-General or a member of the EOSG staff to meet with delegates and representatives of Member States and other organizations; and to participate in conferences, seminars, dinners, anniversary celebrations, and other events. They also contain requests for the Secretary-General's support for a wide variety of policies and projects, andfor assistance in dissemination of information on issues and abuses to a wider audience such as advocating the appointment of a Special Representative of the Secretary-General on violence against children, and specific requests to assist refugees created by the crises in Darfur and the conflicts between Israel and the Palestinians. In addition, some of the correspondence includes nominations for United Nations posts and endorsements of candidates by independent groups; letters of gratitude to and from the Secretary-General; letters of condolences; requests for financial assistance; congratulatory letters to newly elected or appointed individuals; and mission updates. Frequently documents attached to correspondence include lists of individuals who will attend meetings, their CVs, itineraries, background notes, and talking points. The records also contain a large number of update notes, memoranda, and reports which describe and analyse world events and provide suggestions and recommendations on the action to take; mission progress reports and after-mission reports; progress reports detailing the peace process; implementation of agreements and summaries of meetings and impressions garnered; as well as notes generated from meetings of the Secretary-General and members of the EOSG. Processing Archivist: Virginia Pastor, Alex Gelfand Volume: 116 boxes" 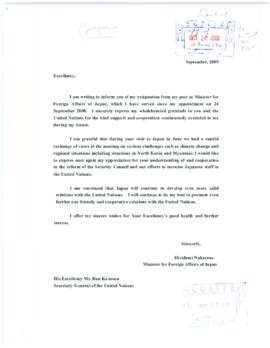