Fonds consists of the records of Secretary-General U Thant, relating to his responsibilities as chief administrative officer of the Secretariat and as chief coordinator of the legislative, political, socio-economic, and military bodies of the United Nations. Also included are records from an earlier period, when he was Burmese Representative to the United Nations, and private records from his post-retirement years. Fonds is arranged in the following record series.

Languages: Some French, Spanish, and numerous others

Series consists of the Secretary-General's files on international conferences, expositions, meetings, and the like, held outside the United Nations system. Records include correspondence, handwritten notes, photographs, reports, etc. Arranged in no particular order. 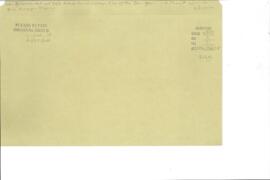