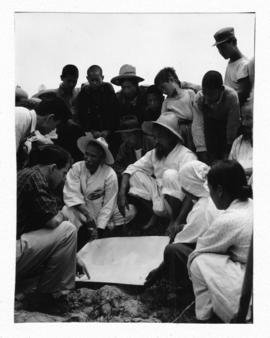 The United Nations Korean Reconstruction Agency initiated in 1953 a program for Community Development Employment (with the assistance of a specialist from the Technical Assistance Administration) whereby villagers were encouraged to utilize their spare time to undertake community improvement, such as irrigation and flood control projects; construction of bridges and roads; installation and repair of public wells, drainage systems, sewers, etc./; land reclamation for cultivation. Villagers have contributed approx. 600,000 man-days to approx. 500 projects. UNKRA has contributed a total of $60,000 (HW 21,000,000) toward the implementation of this program. Here UNKRA's Community Development Employment officer shows village elders how to plan for irrigation projects in their village. 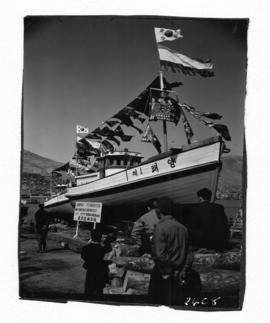 Fishing Industry: Next to agriculture, the fishing industry is the biggest source of food for the Republic of Korea. The fighting hit the industry very hard indeed. Much fishing gear and about a tenth of the fishing fleet were lost. More fishing craft and marine engines are therefore urgently needed. So are nets, ropes, other gear, and materials for making ice to preserve the fish. Last year UNKRA budgeted $1,900,000 for the industry. Its projects included rebuilding the wholesale fish markets at Seoul and Inchon and construction of twenty-three fishing vessels. Three complete cannery units have also been imported-to double the capacity of the cannery industry. This photo taken in Pusan shows newly constructed shops for the fishing fleet. 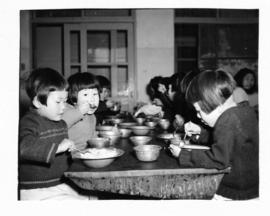 Widows' Children: One of Korea's problems is the plight of widows, many of whom are completely destitute. UNKRA has set up and equipped workshops where widows are trained to sew on UNKRA's imported sewing machines. The widows sell their produce on the open market. While they work, their young children are watched and fed in establishments set up by UNKRA for this purpose. Here children are having a meal in one of these establishments. 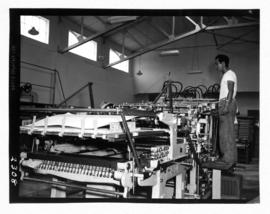 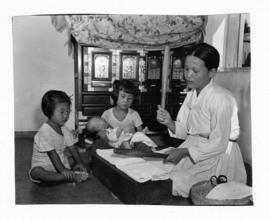 The Won family have been moved to an UNKRA-built house in Seoul and Mrs. Won is pictured here in their new home. She is shown pressing the family wash by the traditional Korean method of beating the clothing with clubs. 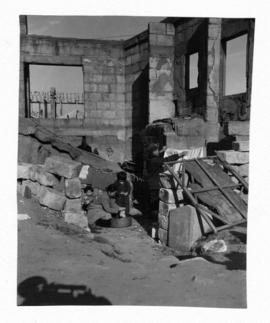 Millions of Koreans have been rendered homeless by bombs, battle and fire. They are crowded into temporary shacks and shelters in overcrowded cities. Millions of new homes are needed in order to provide housing for these people. Housing materials are scarce in Korea and UNKRA has introduced new building materials, brought from the Union of South Africa, to construct rapidly thousands of new houses requiring a minimum of building materials. Special machines turn out pressed blocks of earth stabilized with a small amount of cement. To these blocks are added necessary supplies of lumber, nails, glass and roofing materials in order to construct small dwelling units suitable for Korean families. Pictured here are the Won family in a shelter made for themselves by piling up packing cases and straw against a ruined wall. 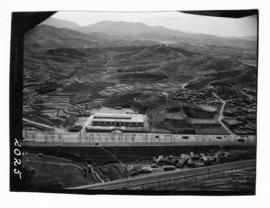 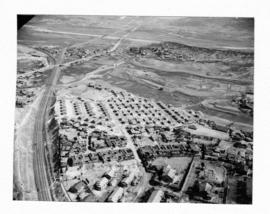 The war rendered homeless millions of Koreans who, still now, live in temporary shacks and shelters in overcrowded cities. Because housing materials are scarce in Korea, the U.N. Korean Reconstruction Agency introduced new building techniques in the country to erect rapidly and with a minimum of materials the thousands of new houses needed. Special machines were imported from South Africa by the Agency to turn out pressed blocks of earth stabilized with a small amount of cement. These blocks, with the necessary supplies of lumber, nails, glass and roofing materials, are used in the construction of small dwellings suitable for Korean families. Here is an aerial view of an UNKRA housing project now under construction near Seoul. When completed this project will include 2,500 units, each of four rooms and a kitchen. 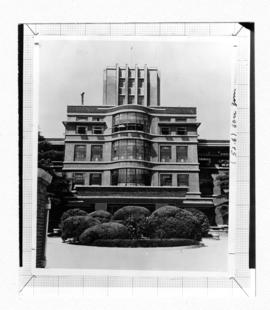 The recently-completed building marks a turning point in the training of Korean medical students. It is the medical college in Taegu, Korea-badly damaged during the war-which has been restored with funds from the United Nations Korean Reconstruction Agency. Together with a medical hospital, laboratories and a nurses' home which were also rebuilt and equipped by UNKRA, it forms one of the major medical teaching centers in Korea. 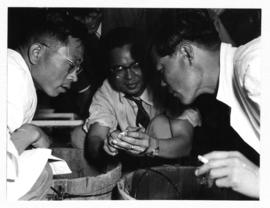 Mr. P. Lipikorn of the Department of Fisheries, Bangkok, Thailand (center) shows Mr. Whang Ho Jung, Chief of Chinhae Hatcheries (left) and his assistant the correct method used in determining the sex of the Tilapia fish.