Series contains all the centrally filed records of the Secretariat from its early period. Predominant date range is 1946-1952. The categories of the filing system are: Office of the Secretary-General (100), Administrative and financial (200), C... 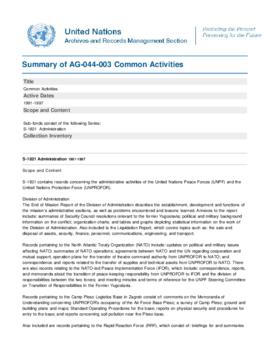 This sub-fonds consists of the following series:S-0592: Headquarters Buildings MicroficheS-0559: Office of Conference ServicesS-0541: Department of Conference and General Services

The records in each subject series generally include correspondence and working papers filed together. The names of the divisions in this list have, in some cases, been chosen from several variations appearing in the records.