The Hon. Soren Olesen, Minister of Interior, Denmark, addressing guests at the dedication ceremony of the National Medical Centre. 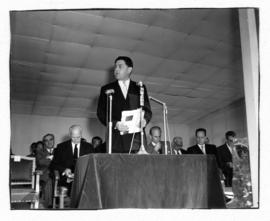 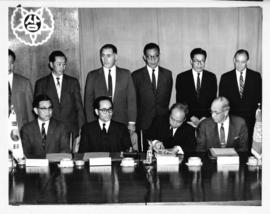 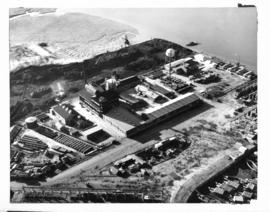 Aerial view of the Inchon Flat Glass Plant. Also built through the United Nations Korean Reconstruction Agency (UNKRA) aid program, this plant produced its first glass in October 1957, is now turning out flat glass at an annual rate of over 12,000,000 square feet. In addition, it manufactures wire-reinforced and figured glass. 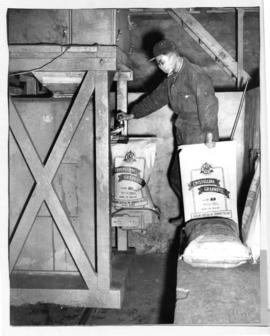 The processed flake graphite is weighted and put into 29.5 kilogram (65 pound) bags for export. 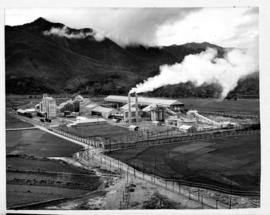 Mungyong Cement Plant, the largest manufacturing plant in operation constructed in the Republic of Korea since the Korean War, is producing more than 200,000 metric tons of cement a year. Built as part of the $128 million United Nations Korean Reconstruction Agency (UNKRA) economic aid program to Korea it started production in September 1957.

The heart of the flake graphite extracting and concentrating process is the flotation cells. Air combined with flotation reagents in the cells form a froth. The graphite flakes, which are held by the froth, are swept mechanically into a trough which them carries them on to additional concentrating and, finally, drying operations. 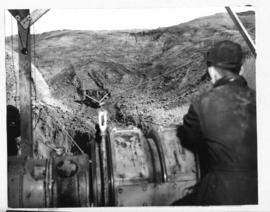 Raw ore for the Shiheung Crystalline Graphite Mill is scraped from surface deposits by slushers. Hills in the vicinity of the mill contain an estimated 20,000,000 metric tons of ore easily available for processing. 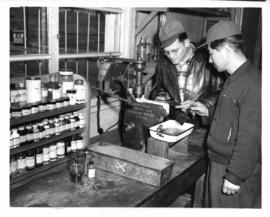 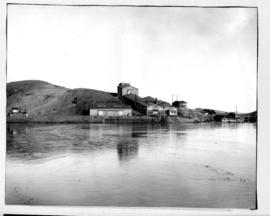 Large-scale production of quality-grade flake crystalline graphite with a carbon content ranging between 87 and 90 percent started in the Republic of Korea in January 1959 at this modern new mill. The mill was built jointly by the United Nations Korean Reconstruction Agency (UNKRA), The Republic of Korea Government and the Shiheung Crystalline Graphite Mining Company of Seoul, which is the end user. Raw ore for the mill is now being mined from surface deposits which covered the hill on the left. The buildings to the right of the picture belong to a small, out-moded mill which turned out a low-grade product.