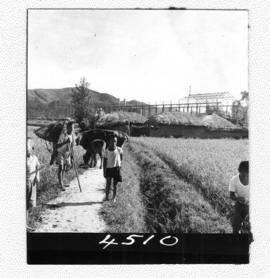 The traditional thatched cottages of the villages crouch under the very walls of the large modern cement plant at Mungying. Though in time the main employment will be at the plant, at present, as for generations before, the people of the valley live off the rice fields. 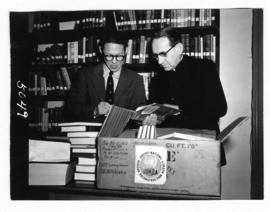 The Beginnings of a New University. Father Theodore Geppart of the Jesuit Mission in Seoul, Korea, and Mr. Mark Kang, librarian, document $10,000 worth of books donated by the United Nations Korean Reconstruction Agency (UNKRA) to form the nucleus of a teacher training library.

Students and instructor in civil engineering section of the Taejon Vocational Training Center. 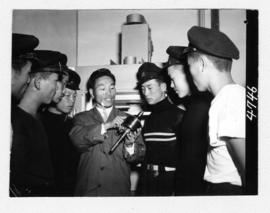 Instruction in an enamel baking test on an electric motor armature. 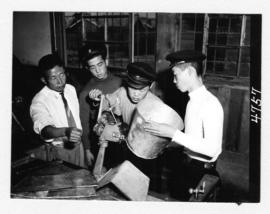 In the sheet metal workshop at Taejon Vocational Training Center. In the elementary classes boys learn how to make buckets and other simple objects in metal that can be used as the school equipment. 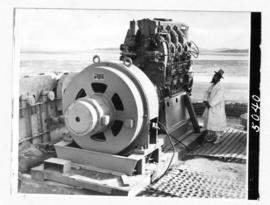 Old and new. A Korean farmer wearing traditional dress surveys a newly-arrived 650 K.W. diesel generator. The generator will power a bucket-ladder gold placer dredge which is being assembled at Taechon-ni, Cholla Namdo. The dredge was purchased by the United Nations Korean Reconstruction Agency (UNKRA) to assist in the mining of valuable gold placer deposits in this area. UNKRA allocated $521,500 for the purchase of the dredge and the provision of technical assistance in putting it into operation, and training Korean personnel. 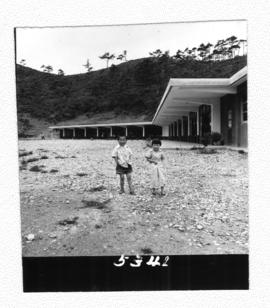 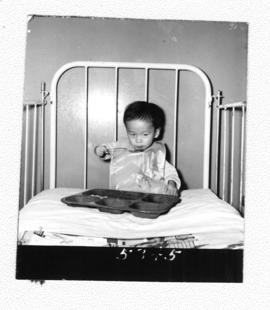 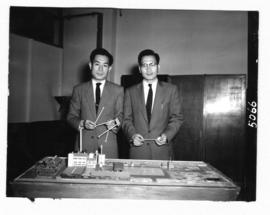 Two of Korea's outstanding young chemists, Pyun Il Kyun and Kang Kong Soo, who left Seoul, Korea on 8 May 1957 for a two month visit to the US to study new glass techniques. Sponsored by UNKRA, the chemists will study under Dr. Scholes at Alfred University, New York. On their return they will set up and operate the testing laboratory at the Flat Glass Plant, which is in process of being built by UNKRA at Inchon. The $3.5 million plant will go into operation this summer and at full production will meet Korea's normal requirements for 12 million square feet of glass a year. 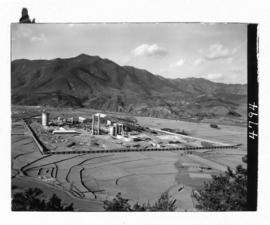 Mungyong Cement Plant. Overall view of the cement plant at present under construction by UNKRA at Mungyong, Korea, at a cost of $8.500,000. When completed, the plant will be the largest cement producer in Korea, with a capacity of 200,000 tons a year. The plant will be operated by a private firm, The Korean Cement Industry Co. Completion is expected early next year. UNKRA undertook construction of the Mungyong Cement Plant to meet the acute need for cement for reconstruction of Korea and for its developing industries.