S-1041 is comprised of records pertaining to press conferences with the Secretary-General held at the United Nations headquarters and at international locations, Daily Press Briefings issued by the Department of Public Information, and messages and statements made by the Secretary-General. Series also contains records pertaining to the Centre for Human Rights, the Human Rights Committee and human rights in general. 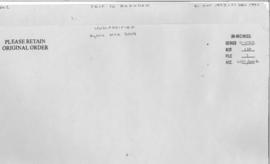