Fonds consists of the records of the United Nations Advance Mission in Cambodia created during its four-month operation. UNAMIC's head of mission and senior military liaison officer later served as UNTAC's political adviser to the SRSG and deputy force commander, respectively. As such, some UNTAC records also are found within the UNTAC fonds (AG-007).

The fonds is arranged in the following record series:

"This series consists of official textual records of the International Paris Peace Conference held at the Palais du Luxembourg, Paris which opened 29 July 1946. The conference addressed state relations following World War II between "Allied and Associated Powers" on the one side and allies of Germany during WWII on the other side: specifically Bulgaria, Finland, Hungary, Italy and Romania. Fonds does not contain a complete set of records of the Paris Peace Conference. Series includes records such as: draft peace treaties proposing territorial, political, military, reparation, economic and human rights clauses for Bulgaria, Finland, Hungary, Italy and Romania; amendments to, and observations on, draft peace treaties by various states and delegations; rules of procedure for the Conference; verbatim records of plenary sessions; reports of commissions and sub-commissions of the Conference; correspondence and other documents submitted to plenary sessions and commissions; memoranda; notes of service of the General Secretariat; programmes of Conference meetings; resolutions; annexes and corrigenda; records of decisions; summary records of decisions; and meeting agendas of commissions and sub-commissions of the Conference. "List of Paris Peace Conference Documents," which do not reflect the exact contents of this series, [S-0533-0001-0001] and "List of Document Symbols" [S-0533-0004-0009] are supplied. Archival folders are arranged by subject in no particular order; within this subject arrangement, folders may be arranged alphabetically by name of non-Allied country where applicable. Records are arranged by numeric order supplied by the documents themselves where applicable (i.e. "Meeting 1" etc.). Records of the following Commissions of the Conference are supplied: Commission on Procedure, Economic Commission for the Balkans and Finland, Economic Commission for Italy, General Commission, Legal and Drafting Commission, Military Commission and Political and Territorial Commissions for each of Bulgaria, Finland, Hungary, Italy and Romania. Records of the following Sub-Commissions of the Conference are supplied: Drafting Sub-Commission (Legal and Drafting Commission), Sub-Commission on Reparations (Economic Commission for Italy), and Sub-Commission on the Statute of the Free Territory of Trieste (Political and Territorial Commission for Italy). Fonds consist of the following Series: S-0533 International Paris Peace Conference (1946)"

United Nations Commission for the Investigation of Greek Frontier Incidents (1947)

Records, 1946-1947, include correspondence; cables; working papers; reports; minutes, lists of delegates, governmental liaison representatives, and accredited correspondents to the Commission; correspondence logbooks; and publications and maps that were used for background data. These concern the organization of the Commission, including personnel matters, political matters, and investigations. Included is the investigation of the United Nations Committee of Experts into the case of Messrs. Zervas, Petsas, and Voltadoros, and an investigation trip to visit General Markos, Commander and Chief of the Ardartes and the Shole of Greece.

Correspondents include the United Nations Headquarters, United Nations Relief and Rehabilitation Administration, and governments and government representatives of Albania, Brazil, Belgium, Bulgaria, China, Colombia, France, Greece, Poland, Syria, the United Kingdom, the United States, the Soviet Union, and Yugoslavia. Also included are some cables, correspondence, General Assembly and Security Council documents, press releases, and printed material, 1941-1947, the earliest of which was used as background material, of Stanley Ryan, Press Officer of the Commission.

United Nations Commission for the Investigation of Greek Frontier Incidents

Records, which also include those of the United Nations Representative for India and Pakistan, consist primarily of correspondence and cables, 1948-1950, concerning practical arrangements for the plebiscite, and general matters concerning the situation in Jammu and Kashmir. Correspondents at United Nations Headquarters include Andrew Cordier, and Secretary-General Trygve Lie; other correspondents include the United Nations Press Officer in New Delhi, the Indian and Pakistani governments, the Prime Ministers of India and Pakistan, and Eric Colban, Principal Secretary of UNCIP. Other records include reports, minutes, resolutions by and about Gilgit, refugees, United Nations Military Observers, political prisoners, and propaganda. A signed copy of the Karachi Agreement of July 27, 1949, which was the cease-fire agreement, is included.

contain correspondence with the United Nations, the Representative Assembly of Eritrea, the government of Ethiopia, the British Administering Authority, and others, and also cables, minutes, reports, speeches of E. Anze Matienzo, the Commissioner, to the General Assembly, memoranda, working papers, press releases, personnel files, maps, and clippings from the files of the Commissioner, the Principal Secretary, the Deputy Principal Secretary, and the Administrative Office concerning the drafting of a constitution for Eritrea, and other political, legal, economic, and social matters.

Of note are minutes, statements, and working papers of the Eritrean Assembly; drafts, 1951-1952, of the Eritrean Constitution; and a picture album presented to the Commission showing a "manifestation for independence" by local inhabitants. One box contains correspondence and case files, 1952-1954, of the United Nations Tribunal in Eritrea. 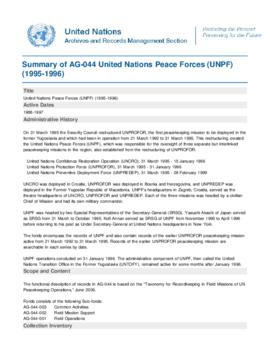 The arrangement and description of AG-050 is based on the “Peacekeeping Headquarters Retention Schedule,” v. 2, August 2011, Department of Peacekeeping Operations (DPKO) and Department of Field Support (DFS). The names of the series comprising AG-050 were drawn from the function series listed in the retention schedule. During archival processing, the files were assigned to series based on their function. Files originating from the offices of the Under-Secretary-General for Peacekeeping and the Assistant Secretary-General for Peacekeeping were kept together and assigned to S-1834.

Department of Peacekeeping Operations - Office of the Under-Secretary-General