Office of the Executive Director

Office of the Special Representative of the Secretary-General

S-1063 contains correspondence of Shaharyar Khan, the Special Representative of the Secretary-General (SRSG) for UNAMIR. Outgoing correspondence consists of daily and weekly situation reports faxed to the Department of Peacekeeping Operations (DPKO) headquarters in New York. These reports include graphs and charts of the UNAMIR daily contingent state, and of combat supplies and their usage.

Incoming correspondence consists of: press releases; daily press briefings and summaries of news conferences from the Department of Public Information (DPI); summaries of news from BBC World News, Voice of America and CNN; and the daily news reports of Radio Rwanda. Incoming correspondence also includes humanitarian assistance reports; minutes of meetings of the UNAMIR Humanitarian Assistance Advisory Group (UHAAG); and reports of UNAMIR activities produced by the Situation Centre of the DPKO.

S-1063 also contains the records of Ms. Isel Rivero, the Special Assistant to the Special Representative of the Secretary-General. Included in her records are: speeches, statements and daily schedules of the SRSG; documents pertaining to the expiration of the UNAMIR mandate; and correspondence and summaries of meetings between the UNAMIR and the Government of Rwanda.

Office of the Force Commander

Division of Administration and Management

Office of the Police Commissioner

S-1060 consists of records of the Office of the Police Commissioner, who was in charge of UNAMIR’s Civilian Police (CIVPOL) force. CIVPOL was responsible for performing monitoring activities in accordance with UNAMIR’s mandate. Included are situation reports (SITREP) sent from the CIVPOL Commissioner to the Special Representative of the Secretary-General (SRSG) as well as internal situation reports and meeting summaries. Also included are records documenting the following: the activities of the Civilian Police in Rwandan sectors (including administrative memoranda, reports of heads of CIVPOL divisions, incident reports and reports of criminal investigations); the assignment of officers to tours of duty; the deployment and repatriation of CIVPOL Observers; and communication with Force headquarters, Military Observers headquarters, local authorities, United Nations agencies and non-governmental organizations (NGOs) on police matters. S-1060 also includes records pertaining to the training of the United Nations Civilian Police.

S-1060 also documents UNAMIR’s involvement in the establishment and supervision of the L'Ecole de la Gendarmerie Nationale de Ruhengeri (EGENA) (the National Gendarmerie Training School in Ruhengeri) and the Rwandan Police Communale. Records documenting administrative activities of the schools include correspondence regarding the establishment of the schools and the acquisition of supplies, class schedules and lists of students and instructors. Also included are course materials on such topics as police authority, the conduct of criminal investigations, the use of weapons, intelligence gathering, traffic control, human rights and the treatment of prisoners. Course materials consist of outlines, notes, lecture titles and course descriptions. In addition, S-1060 documents the formation and history of EGENA and the Police Communale. 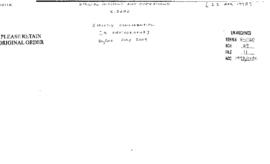