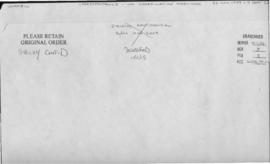 The United Nation Mission in Sierra Leone (UNAMSIL) was the peacekeeping mission deployed in Sierra Leone between 22 October 1999 and 31 December 2005. Headquarters were located in Freetown, Sierra Leone. Prior to UNAMSIL, the Security Council established the United Nations Observer Mission in Sierra Leone (UNOMSIL) in June 1998 to monitor human rights abuses and advise efforts to secure the country. The conflict continued, with some attacks forcing UNOMSIL personnel to evacuate. Diplomatic efforts of Special Representative Okelo and the parties allowed negotiations to be opened and an agreement to be signed in Lome to end hostilities and establish a government of national unity. The parties to the conflict also requested an expanded role for UNOMSIL. On 22 October 1999 the Security Council authorized the establishment of the United Nation Mission in Sierra Leone, a new and much larger mission with a maximum of 6,000 military personnel, including 260 military observes, to assist the Government and the parties in carrying out provisions of the Lome peace agreement. At the same time the Security Council terminated UNOMSIL. The Security Council revised the mandates of UNAMSIL several times to increase its authorized strength. UNAMSIL was not always foreseen to succeed: at one point in May 2000, the mission nearly collapsed when the rebel Revolutionary United Front (RUF) kidnapped hundreds of peacekeepers and renounced the ceasefire in a move that endangered the credibility of UN peacekeeping. Outraged by the chaos that followed, the international community put pressure on the rebels to obey the ceasefire and slapped sanctions against RUF sponsors. Subsequently, UNAMSIL launched new mediation efforts and brought the two adversaries back to the negotiation table. It brought in more troops to monitor the ceasefire and began disarming fighters from both sides. The United Kingdom, which had sent a force to restore peace following RUF’s breach of the ceasefire, later started restructuring the army while UNAMSIL and other international partners concentrated on training the local police force. By early 2002, UNAMSIL had disarmed and demobilized 75,000 ex-fighters, including child soldiers. The Government declared the war officially ended. UNAMSIL successfully carried out its tasks assigned by the Security Council: assistance in the organization of free and fair elections, in the training of Sierra Leoneans in human rights and in setting up Special Court for war crimes, in the Government set up of a Truth and Reconciliation Commission, in working with UN agencies to establish public health, social and economic projects. However, Sierra Leone still faced challenges in regards to the root of the conflict and the culture of human rights. To help meet these challenges, UNAMSIL was succeeded by a new mission – The United Nations Integrated Office for Sierra Leone (UNIOSIL) – established by the Security Council Resolution 1620 (2005) to help consolidate peace in the country. UNAMSIL Special Representative of the Secretary-General and Chief of Mission was: Oluyemi Adeniji of Nigeria (December 1999 - July 2003), Alan Doss of the United Kingdom (July - December 2003), and Daudi Ngelautwa Mwakawago of Tanzania (December 2003 - December 2005). The Force Commander and Chief Military Observer was: Vijay Kumar Jetley of India (December 1999 - September 2000), Daniel Opande of Kenya (November 2000 - September 2003), and Sajjad Akram of Pakistan (October 2003 - September 2005). Police Commissioners was: Joseph Dankwa of Ghana (December 1999 - February 2003), and Hudson Benzu of Zambia (March 2003 - September 2005).